The Schwules Museum’s exhibition of drawings by Krzysztof Jung is its first by an artist from Poland. Jung was recognized as an important player in the world of homosexual art in the splendid exhibition Ars Homo Erotica curated by Paweł Leszkowicz at the National Museum in Warsaw in 2010. Predating the 2017 show of Queer British Art 1861–1967 at Tate Britain, the Warsaw exhibition was a beacon. It remains unimaginable to this day that Berlin’s Neue Nationalgalerie would showcase gay art. In 2016 Jung’s performance art was encapsulated in an exhibition at the Salon Akademii gallery of the Academy of Fine Arts in Warsaw. His performances had pushed the hitherto taboo naked human body into the spotlight. They addressed closeness, solidarity and communication, and their deconstruction. Jung wove nets of cotton twine between his actors, tying them together, separating and connecting them, and making boundaries painfully felt. All that is left of his performances are reviews, bits of thread and photographs.

The focus of our exhibition is Krzysztof Jung’s Sebastian series, inspired by Derek Jarman’s 1976 film. Saint Sebastian preoccupied Jung from the mid-1970s into the 1990s. Like Jarman, he was captivated by the male nude, by submission to pain. Jung’s drawings range from the most refined pencil hatching to feverish oil pastels, tender rose watercolours and precise ballpoint. But in his variations the surrender to death comes about without a single arrowhead. Death is passed over, invisible. As the human immunodeficiency virus raged in the West, first and foremost among gay men, the Iron Curtain shielded Polish homosexuals from it. We are left to wonder whether AIDS played a role in Jung’s Sebastian works. The only obvious connection is their contemporaneousness.

Until now, Krzysztof Jung’s most beautiful homoerotic pieces, a large collection of drawings of male nudes, remained unknown to the general public. They were held by the museum of the Warsaw Academy of Fine Arts, and are now being put on display for the first time at the Schwules Museum. In the 1980s Berlin was an important destination for Jung. It symbolized personal freedom to him and, vitally, the unrestricted unfolding of his gay desires. This exhibition is happening largely thanks to the perseverance of Dorota Krawczyk-Janisch, the executor of Krzysztof Jung’s estate, and his old friend Wojciech Karpiński.

Thanks to Krzysztof Jung’s estate administrator Dorota Krawczyk-Janisch and his longtime friend Wojciech Karpiński, whose perseverance made this exhibition possible.

The exhibition is curated by SMU cofounder Wolfgang Theis. 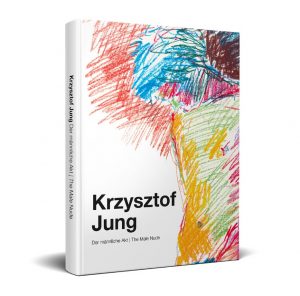 The book that accompanies the exhibition includes texts by Dorota Krawczyk-Janisch, Wolfgang Theis and Raimund Wolfert.

The photos here can be used exclusively for reporting purposes with the complete source text included.