The Butt Years – Those were the first decade of the 21st century. From 2001 until 2011 the print version of the queer fanzine from Amsterdam was published with the image of a new kind of gay man stamped on in iconic pink colored photographs. The man: less normalized than the body ideals of the 1990’s, far more casual, hairy and sporting beards. For a time these images circulated with the label “Hipster”. But different from the its mainstream variant, the homo-hipster engaged the subversive potential of the counter-figure of the 1960’s and with this created a powerful image of queer masculinity. In the context of gay historiography, the Butt-Boys are also an answer to the history of HIV and AIDS, its medicalization and the normalities of body politics that followed. Aside from the triumphant sport-sex jock image, the men in Butt are just as sexy as they are vulnerable: Butt shows gay intimacy. This aesthetic of the non-perfect is to be understood in the background of the amateur culture of porn 2.0.

To close the presentation, Rehberg will speak with Prof. Brigitte Weingart, media researcher in Düsseldorf, and Dr. Michael Bucher, Independent Scholar in Berlin. 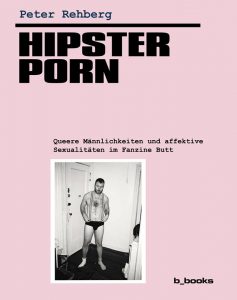